In a paper titled ‘A History of Vampires: “What We Vid in the Shadows” and Nostalgia for the Recent Past’, I reflected upon some practice-based research that grew of my doctoral research. My thesis project looked at individual vids, but only briefly touched upon the vidshow, which is one of the key distribution and exhibition contexts for the vid form. A vidshow is a curated programme of vids – fan-made video art pieces which re-edit television and film sources – shown at media fan conventions. These tend to be 45-50 minutes in duration, and will contain a programme of approximately a dozen vids, curated around a unique theme.

At the 2016 fan convention VidUKon, I curated and screened a vidshow themed around vampires. As a case study, this research considers canon-formation and the memorialisation of screen vampires as mediated through fannish discourse. This is a starting point to recognise the vidshow format as a site of memory work, nostalgic retrievals, and how media fans (re)present media histories.

To plan my vidshow, I first selected vids from my research collection that were made from vampire films and television series, and then drafted a list of screen vampires to guide my search for other vids to address gaps. Happily, I found more vids than could fit in an hour’s programming slot. More importantly, reflecting on the process of selection and curation proved useful in naming particular questions and assumptions arising from the process. For example, how might I best balance a personal overview of my favourite screen vampires (Lestat, Spike, all of The Lost Boys) with a representative sample of vampire characters as seen through vids? How could this show act as a recent history of media fandom’s relationship with screen vampires? The majority of films and television programmes represented in the vidshow were produced within the last 20 years; the vids made from older material are themselves recent productions. Also, vids are works of textual analysis that offer critical and creative responses to their source texts: taken together, what would my selection argue about how we watch vampires?

Ultimately, the process of selecting vids demonstrated certain tendencies in how vampires have been shown in vids. For example, in the sheer quantity of white male vampires that have captured the attention of vidding fans; to counter this, I made sure to include more diverse representations. 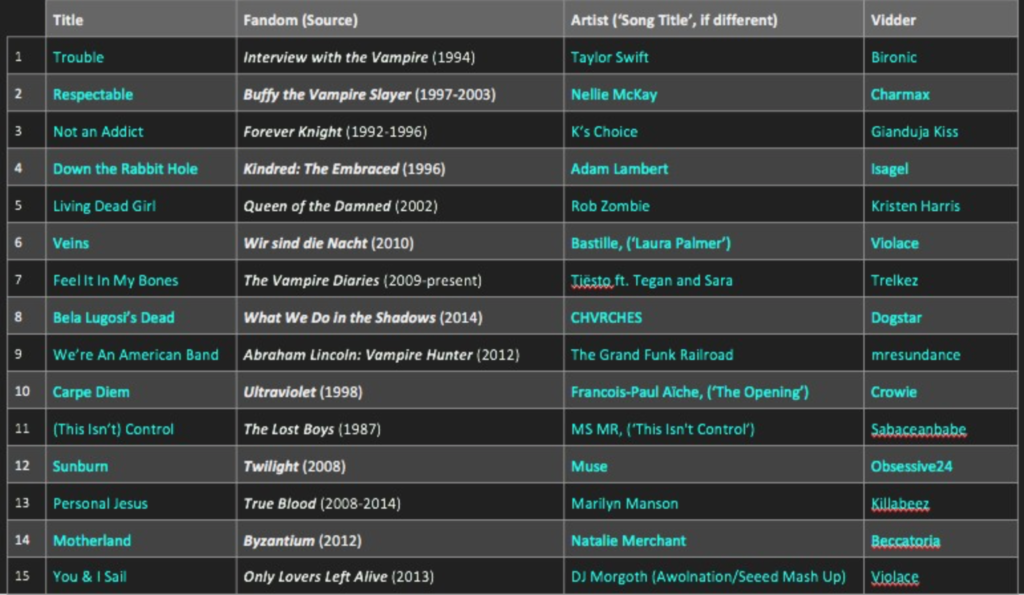 Amy Holdsworth, in Television, Memory and Nostalgia (2011), suggests nostalgia functions as a mode ‘through which we glimpse past television’. Building on that, I propose that the vidshow is both a site of negotiating fan-favourite and cult canons of vampire shows and characters, and a mode of enacting memories of past television.

Rather than solely capturing loss, these glimpses of past television (in vids, and in vidshows) are used to spark emotions in the present. These emotions can certainly be based in recall and memory, but in the context of a vidshow are part of a sustained affective engagement with media.

A journal article further developing this research is in preparation.