At this year’s Society For Cinema and Media Studies (SCMS) conference, held in Toronto, I participated in a workshop titled ‘Syllabus Hack: Introducing Television Studies in the Internet Era’.

This session was organised and chaired by Casey McCormick (McGill University) and featuring colleagues David Pierson (University of Southern Maine), Jacinta Yanders (Ohio State University), Bridget Kies (University of Wisconsin-Milwaukee), and Melanie Kohnen (Lewis and Clark College). While this session was planned as a fully interactive workshop, where attendees would ‘hack’ an introduction to television studies syllabus, the aims and outcomes of the session shifted in response to two factors: scheduling, and the reality of how television fits into undergraduate teaching. 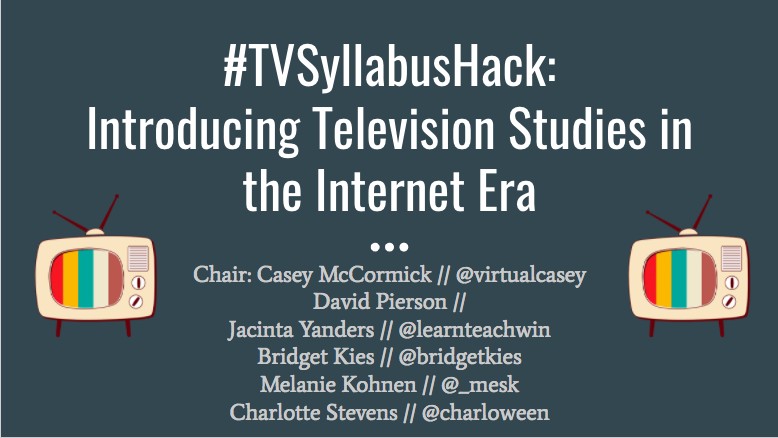 The workshop session was scheduled for the final session of this five-day conference, meaning that the initial plan – breaking into groups to each build a new Intro to TV syllabus – was shifted to a wider-ranging roundtable discussion over the two-hour slot. McCormick did scribe into a shared document during the discussion, which one participant noted was closer to a whole degree’s worth of television topics, and not just a single module. The workshop panel each introduced strengths and weaknesses of their own syllabus (offered for dissection), and these successes and concerns guided the roundtable discussion that followed.

Secondly, very few of the workshop panellists or attendees actually teach a module called ‘Intro to TV’ or similar. Instead, television fits into general communications modules, is presented to students in relation to literature or film degree courses, or in once case, is framed as a digital composition module (with assessments that include writing and producing podcasts, and other non-traditional points).

At the end of the session, which was in danger of running over despite coming at the very end of a long conference, the general feeling seemed to be that it was very useful to have a sustained and passionate discussion of pedagogy at SCMS. The conference gave an excuse for scholars and educators from several different national contexts to gather together to share best practices and discuss teaching philosophies, which was a good complement to an event that is otherwise focused on individual research projects.

The workshop was live-tweeted by participant using the #tvsyllabushack hashtag. Following the end of the session, the conversation has continued on twitter.

All materials have been shared by McCormick in a Google Drive folder. We are building and sharing a collective resource for global teachers of television, including a spreadsheet where folks can declare their individual expertise in certain areas, to coordinate potential future guest lectures and sharing of resources.

Speaking personally, I found it very valuable to learn about colleagues’ lesson plans, the different philosophies of what screenings to include, whether or not certain textbooks were mandated (or whether blogs and less formal material was deemed appropriate), and the different ways television appears in undergraduate degree programs in several different countries. There was no question about the importance of teaching television, but there were many opportunities to constructively discuss the finer points of how to structure and deliver this material.