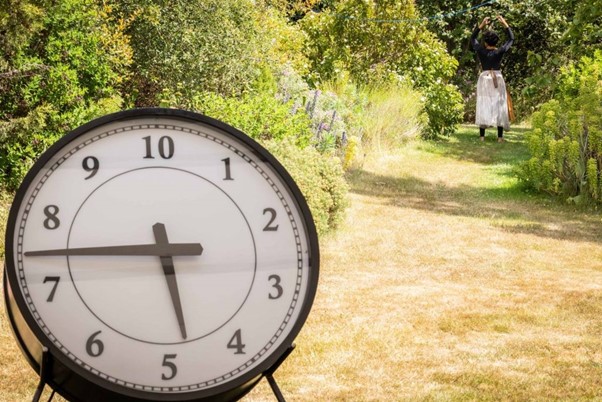 Research Thinking Suspension: The Sit-in Curriculum and Sit-in as Curriculum The Potential of Disruption 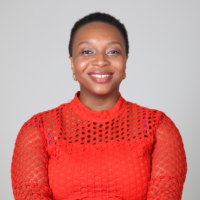 Thinking Suspension: The Sit-in Curriculum and Sit-in as Curriculum The Potential of Disruption

I would like to begin this short blog by sharing my experience in an exhibition earlier this year: Sit-in #2 | To Be Potential, a part of a long-term curatorial plan, The Ignorant Art School: Five Sit-ins towards Creative Emancipation at Cooper Gallery, Dundee University.

There is a clock, eerily staring from the façade of the gallery. Re-calibrated to a decimal pattern, the clock strikes in an entirely different pattern from the astronomical order without disrupting the flow of time. 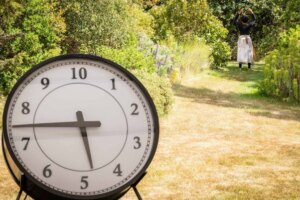 The Ignorant Art School 12 Hour Sit-in Revel, Ranjana Thapalyal with Hamshya Rajkumar, SOUND-SEED, Performance, with Ruth Ewan’s artwork We Could Have Been Anything That We Wanted to Be (2011), to time the day via revolutionary decimal time. Photo credit to Sally Jubb. All rights reserved.

Made by artist Ruth Ewan, the clock echoes the idea of resetting time (inspired by the new calendar proposed for the new Republic after the French Revolution, 1789) and thus sets the activist tone for the exhibition. The attempt of rupturing time to proclaim a new regulation and order, is nothing new. One of the most notorious examples would be Era Fascista, a calendar introduced by fascist dictator Benito Mussolini. But putting their political ends aside, the physical and the metaphorical presence of the clock means something significant to Dundee, where the exhibition first took place (it also toured to Hatton Gallery at University of Newcastle in March 2022). In 1993, the Timex Coporation, the world-famous watch manufacturer, and the major employer in the city, was hit by a six-month industrial unrest, which eventually resulted in the closure of the entire Timex plant in Dundee. It was a moment when the watch assembly lines were suspended, when the clock stopped giving time. Being considered one of the largest industrial actions of late 20th century Britain, the Dundee Timex strike added another rebellious layer to the fabric of the city. Therefore, the recalibrated clock hanging outside the gallery not only reminds people of the history of the city, but also brings this part of redical history into the exhibition.

The research began with my participation (as an art student) in a few teach-out sessions during recent UCU strikes and a close study of a 1968 protest at Hornsey College of Art, London, where its students and staff started a six-week sit-in. This exhibition, The Ignorant Art School | Sit-in #2 | To Be Potential, features fourteen artistic experiments of pedagogies and the Hornsey sit-in is one of them. Adopted the language of protest tradition, the exhibition introduces the tactic of sit-in to art education and its curriculum.

I borrow the term “suspension” directly from the industrial action. Also bearing in mind of the term’s root in phenomenology, I want to roughly refer to Giorgio Agamben’s analysis of suspension, which may offer some insights for our re-examination of education.

In Agamben’s discussion of the “state of exception”, suspension indicates a period when the law is temporarily put on hold. Instead of rupturing the law, however, it puts the law on hold in order to preserve it. Of course, the law, in Agamben’s historical analysis, stands for the law-making power of the old sovereign, which may not make sense in modern days, but this law-preserving power is worthy of closer examination.

Coming back to the sit-in protest or the UCU strike, the strike does not simply mean a renunciation of education, leaving a chaotic and disruptive unrest behind. Conversely, it preserves the educational system. Though seemingly paradoxical—as discontinuity preserves continuity—the suspension is not a continuation as such. Rather, it preserves the system by suggesting a reformation within the system and requires an action to be taken. In Cambridge Dictionary (n.d.), suspension means “the act of stopping something happening, operating, etc. for a period of time”. The suspension is, first and foremost, “the act”. It implies an action or taking actions to stop and pause. Going a step further, but still following Agamben’s analysis—in his successive books and treatises—this moment of pause (or expectational moment in his words) is an opening to other possible interpretations. It opens to creative and alternative practices. Like the fourteen sit-ins presented in the exhibition, together, they show the potentials of art education.

Many may think education is a process of actualising one’s potentiality and achieving specific goals, however, Agamben’s analysis reminds us that the notion of potential needs to be revised as “not being in actuality”. As such, education focuses on one’s active capability for not-being or not-doing in the scenario of teaching and learning, thus, not to learn: “Perhaps there is nothing more radical than when a student proclaims ‘I would prefer not to learn’” (Lewis, 2014, p. 346). Some educators today also draw ideas from Agamben’s dialectic thinking of (im-)potentiality (Rogoff, 2006; Lewis, 2014; Lewis & Friedrich, 2016), but it is only through this practical merging of “not-doing” and “opening” that we can understand the reformative power of the sit-in.

Beginning with this sort of “not-doing”, sit-in is such a suspension that combines potential and openness. Therefore, the reformation it brings to the fore is a complex of practice, being a pause and forward simultaneously. As a disruptive tactic, it should no longer be recognised as merely an external examination of education but a pedagogical experiment which is inherent to the system. In other words, the sit-in praxis is part of the curriculum.

It is not difficult to link sit-in practices to today’s UCU strikes (both shout out a rebellious tone) in which an entire generation of students and staff at UK universities are inevitably involved. Strikes, indeed, put on hold the teaching and learning in schools, but strikes alone are not adequate to become an educational suspension without partnering with teach-outs. While sit-ins historically were non-violent actions tightly associated with protests and occupations of civic places (like schools), teach-outs go out. The practice of teach-out, also having a hyphenated form like the term sit-in, may share my analysis of the sit-in practice. It encourages students and staff to learn from the outside, studying the social and political conditions that the school is set upon. Therefore, social engagement or community intervention is no longer the artistic approach for art students in schools. Rather, it is part of the curriculum, a curriculum which has the potential to reform itself. I may not expend this further, but I think that reformation is not something rhetorical but an inherent task of education. Like the history of rebellion in Dundee slips into the gallery, the sit-in and teach-out feed schools. Or let’s put it the other way around, schools open up to these practices, during their suspensions.

“What is potential can both be and not be, for the same is potential both to be and not to be”, says Agamben (2000, pp. 177, 182). I went out of the gallery and looked at the clock again. It is the place where even time is rendered revolutionary. Tick tock. Each unit consists of a pause before moving forward.