On 4th December the Creative Industries Cluster hosted the Craft Economies: Inequalities, Opportunities, Interventions conference at STEAMhouse Birmingham. The conference was organised as part of the AHRC funded Craft Expertise project which I lead in collaboration with Crafts Council UK. The aim of the conference was to highlight and discuss issues around diversity and inequalities in the craft sector, and give presenters a space to share their work on various aspects of craft. We welcomed speakers from around the world and overall were delighted to see the connections being made among a diverse audience of makers, academics and organisations. You can download a PDF of the programme here.

The day began with the keynote from Deirdre Figureiredo (left) of Craftspace in Birmingham. 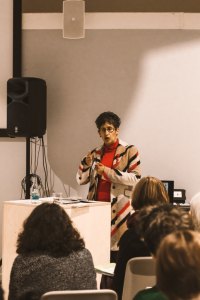 Deirdre, who is also involved with the Craft Expertise project, discussed her journey into craft and the challenges she has faced in the arts and cultural sector. She highlighted some of the recent work Craftspace is doing to explore alternative pathways into a craft career which sit outside of the traditional routes through higher education, such as the Women’s Maker Movement project with Shelanu. The examples show that by working with communities and delivering craft skills training, women in marginalised and diasporic communities can engage with craft, develop skills and explore opportunities to make money from craft. Deirdre ended with a call for individuals and organisations in the room to pledge to get involved in a working group to start addressing issues around inequalities in the craft sector. We were pleased in the end to get 12 people signed up to the working group, so there will be more information released about that in due course. 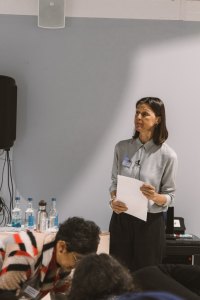 Deirdre’s keynote was followed by a panel on Craft in the Community featuring Julia Bennett of Crafts Council UK (right), Fiona Hackney of Manchester Metropolitan University and Roberta Comunian of King’s College London. Julia talked about future opportunities in craft, such as the idea of inclusive growth as an alternative mode of craft entrepreneurship which is not necessarily driven by economic imperatives. This had some connections with Deirdre’s call for alternative pathways into craft, and the idea of more social, community-driven models of craft was a recurring theme throughout the day. Fiona’s work on the ‘Maker-Centric’ project and edge places of creativity provided useful insights into community-led craft practice with local and global connections, and the idea of ‘place as process’ when thinking about such projects. Roberta provided a fascinating insight into the role of craft intermediaries in Cape Town, South Africa. She provided more examples of the social and community aspects of craft entrepreneurship which are distanced from market logics. 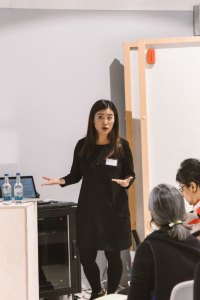 After lunch I chaired a panel on Global Craft with Charlotte Waelde from Coventry University and Ya-Chao Tu (left) from King’s College London. Both came at the subject of craft in different ways – first Charlotte discussed the important issue of copyright and intellectual property in craft, then Ya-Chiao looked at the relationship between tourism and the craft industry in Stoke-on-Trent and in the Yingge district of Taiwan. Rose Sinclair of Goldsmiths was also scheduled to present in this panel but she unfortunately couldn’t make it. She did kindly record her presentation, which you can listen to here. Rose discusses Black women’s textile practices and the concept of empathic activism as a way of thinking about more inclusive craft economies. 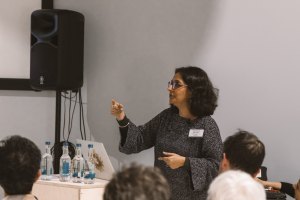 The third panel on craft and sustainability featured presentations by Lauren England of King’s College London, Geetanjali Sachdev (right) of Srishti School of Art, Design and Technology in Bangalore, and Iain Taylor of BCMCR. All discussed the subject of craft and sustainability from very different perspectives. Lauren talked about how early career makers negotiate between balancing passion for craft with sustainability. Geetanjali discussed the role of botany in Indian craft practices, and potential pedagogical benefits. Finally Iain Taylor presented a different take on craft practice using the case of Riffs, and the process of making the journal and its zine editions in short timeframes at events.

The final panel was another chance to explicitly address the issue of inequality and diversity in craft. Rajinder Dudrah chaired a panel which included myself, maker Majeda Clarke, Lorna Hamilton-Brown and Jeanette Sloan of the website BIPOC in Fiber. 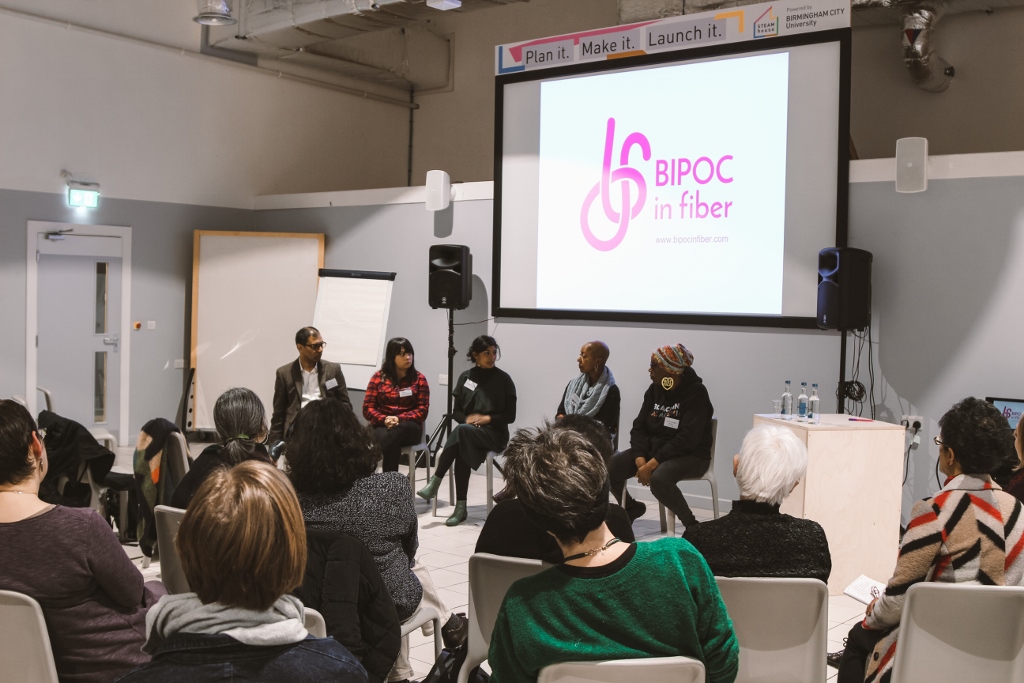 We talked individually for 5 minutes each about our take on diversity in craft. I discussed my research so far on the Craft Expertise project, including the experiences some of my interviewees have had of racism and microaggressions in craft. Majeda talked about how when she was growing up, she was discouraged from pursuing a craft career because her family did not consider it a ‘real job’. Lorna described how she was once told that “Black women don’t knit”, so she decided to write about how Black women do knit for her MA dissertation with the Royal College of Art. Jeanette Sloan then introduced the website she founded, BIPOC in Fiber, which provides a platform for BIPOC (Black, Indigenous People of Colour) working in fibre crafts to showcase their work and be part of a community. Jeanette launched a crowdfunder for the website which raised over £32,000 in just 28 days. We finished with a discussion about what could be done to make the craft sector more inclusive. Lorna finished by saying “I have never been invited to the table [of the major arts/cultural organisations]. So I’m just going to make my own table”. Stormzy was often referenced as an example of someone who made his own table and is now reaping the rewards.

The discussion highlighted that there is a lot more to do to make the craft sector more inclusive, and that organisations need to step up and take active steps towards doing this. The Craft Expertise project will continue to work towards providing the evidence base for practical steps and interventions to this end.

A huge thanks to everyone who attended, participated and helped throughout the day. I would particularly like to thank the presenters, BCMCR colleagues Annette Naudin, Rajinder Dudrah and Craig Hamilton, the staff at STEAMHouse, BCU School of Media students Holly Payne, Thomas Sayers and Ollie Hambrook for recording video and photography throughout the day, and the caterers Digbeth Works.

Catch up with Tweets from the day on the hashtag #crafteconomies.