Research Anxieties of Legitimacy and Re-using Existing Media – paper report from At Home With Horror?

Anxieties of Legitimacy and Re-using Existing Media – paper report from At Home With Horror?

I presented a paper titled ‘”It’s all for you”: Damien’s Appeal to Intertextual Legitimacy’ at the University of Kent’s ‘At Home With Horror?’ conference, hosted by the Melodrama Research Group and the Centre for Film and Media Studies, 27-29 October 2017.

The conference offered three days of work on horror television, both contemporary and historical. Helen Wheatley’s keynote, ‘Haunted landscapes: trauma and grief in the television ghost story’ explored the relationship between haunted houses, the ghosts which inhabit them, and the landscapes in which both find themselves. My paper was scheduled for final morning of the conference, and was an opportunity to extend my interest in resurrecting historical media through a case study of a short-lived horror television series.

In 2016, A&E aired a small-screen sequel to The Omen (1976). Titled Damien, it follows the now-adult Damien Thorn (Merlin’s Bradley James) on the day he begins to discover he is the Antichrist. While on assignment as a war photographer, Damien is approached by a mysterious old lady who unlocks Damien’s repressed memories from his eventful fifth birthday party. Rather than shooting these flashback scenes anew, the show instead intercuts clips from the birthday party sequence in The Omen, and asks the television audience to accept archive footage of the film as this new Damien Thorn’s recovered memories. Throughout the first couple of episodes, Thorn recovers more of his childhood memories, and we see more clips from The Omen. However, Damien takes place in the present day; these ‘memories’ are clearly from the 1970s, more than a decade out of step from this Damien’s timeline.

Using Damien’s flashbacks as a case study, this paper considered the presentation of memory – for series as well as audience – in adapting and rebooting cinematic horror for the small screen. The question becomes whose memory is being shown? Diegetically, it is the character’s own memory; intertextually, it appeals to its audience’s memories. In practice, the obvious discontinuity of the mise-en-scène and the clips’ own iconicity provides a point of fracture in Damien’s attempt to set itself up as the one true heir of The Omen. The clips are given a warm orange post-effect to clearly set these apart as Thorn’s memories. 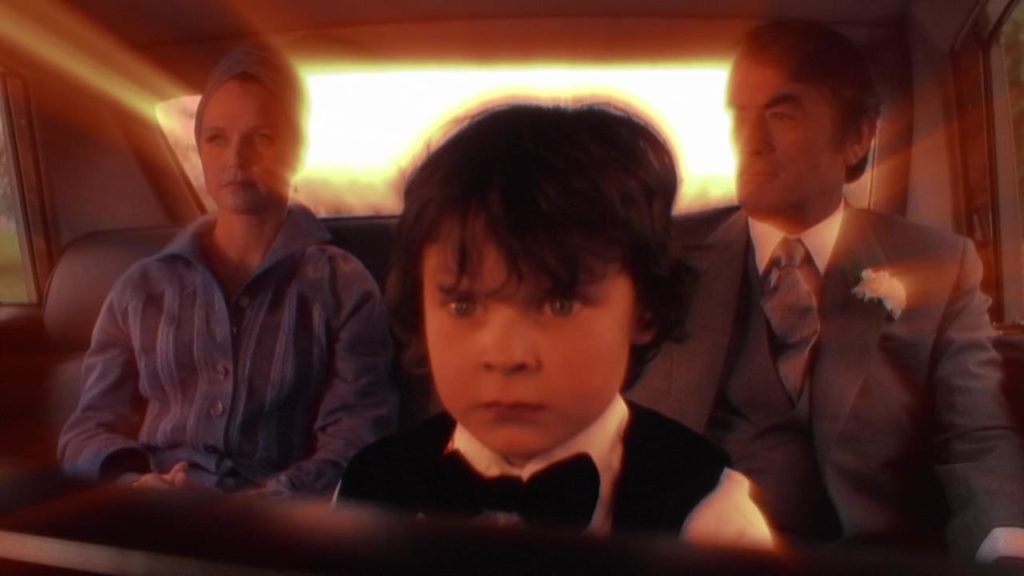 A moment from The Omen, re-presented as adult-Damien’s recovered memory

The choice to use clips from The Omen potentially betrays some anxiety about Damien’s legitimacy on the part of its creators, both as a text and as a (historically, lesser-status) television series. Not choosing to re-shoot footage of these iconic scenes – that is, by maintaining a direct narrative and textual connection between Damien and its source text – seems to be in aid of legitimizing Damien’s connection to its progenitor. Using pieces of The Omen as its protagonist’s fragmentary memories, Damien claims an inheritance of sorts from The Omen to the exclusion of its other sequels – Damien: Omen II (1978), Omen III: The Final Conflict (1981), the film novelisations and their sequels, and the 2006 remake of the first film.

The series asks its audience for a purposeful forgetfulness on behalf of the viewer, or a convenient amnesia, taking the programme’s lead in mis-remembering the history of the franchise for this installment. Rather than a reboot merely haunted by its intertextuality, Damien demands to be viewed as a sequel to a specific origin text.

In the writing of the paper, more complex questions of intertextuality emerged beyond the series’ use of clips of The Omen as legitimating agents. Damien uses iconography that is core to the Omen mythos: rottweilers as devilish familiars, a set of ancient anti-Antichrist daggers, and the ‘666’ birthmark under Thorn’s hair. Each of these elements play an integral role to the other Omen sequels (in Damien: Omen II, the animal familiars are crows, not rottweilers), and each appears again in the television series. I want to argue that these elements have been made iconic/significant through their repetition in the sequels, and not just because the television series is repeating iconography from the original film. The daggers, familiars, and discovery of the hidden birthmark each play a key role in the separate narratives of each Omen entry; what is their role, beyond signalling that each individual text is part of a whole?

I am interested in exploring this further, and was particularly inspired by Misha Kavka’s paper given in the panel after mine, which discussed Stranger Things (2016-present) and its evocation of affective nostalgia for everyday objects. Perhaps some closer look at material history and nostalgia, and an affective dimension of intertextuality, will help articulate how these objects tie together The Omen and its many sequels.