Material Reflections is a collection of short reflective pieces exploring the complex personal relationships that people form with material things. Bringing together perspectives from a range of academics, students, and cultural practitioners, the project seeks to highlight the breadth and plurality of ways in which material things impact upon our ideas, identities, research, and practice. This Material Reflection comes from Dr Sam Coley, who teaches a range of undergraduate and postgraduate radio production modules for the Birmingham Institute of Media and English. Sam has previously worked in the NZ and UK radio industries and his ongoing documentary production as a freelancer formed the basis of his 2018 PhD. 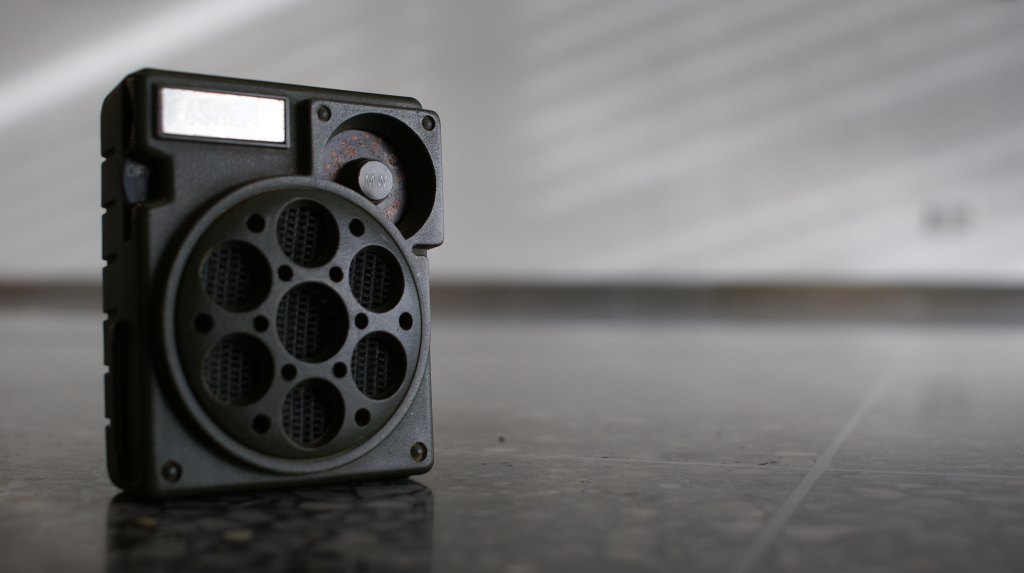 This is my first radio. In 1976 my parents bought it from the Duty Free at Hong Kong airport, on a stopover while heading home to New Zealand. It remains the best gift I’ve ever received. In fact, it’s fair to say this small green box helped shape the course of my life.

Although it looks like something from the armed forces (to a six-year-old anyway), I doubt it would last long on the front line. It stopped working decades ago. But I still keep it as a memory of childhood and a reminder of my early obsession with radio. Many of the songs I still love today were first heard through its tiny 0.25-watt speaker. As the cliché goes, I used to sleep with it under my pillow and would drift off to the sounds of 3ZB and Radio Avon 1260, the AM stations which used to broadcast around Christchurch. My father still likes to remind me how he’d hear it playing in the middle of the night and would shake me awake to switch it off. It was listening to this radio that my first (albeit limited) understanding of radio presenting, production and programming began to formulate. Due to its influence I’ve kept at least one foot in the radio industry my entire working life.

The study of radio often refers to the ‘impermanence’ and ‘ephemerality’ of the medium. Yet, the physical artefact of a radio is obviously tangible. Although it no longer works, this old transistor is testament to literally thousands of hours of listening pleasure. Which, I guess, is why I still keep it. It’s followed me around the world, either sitting on a desk or buried in storage and I’ve never once thought of throwing it out. Today, I use it in audio production classes by passing it around as a relic of radio’s longevity (it’s somewhat sobering to think that many students have never touched a ‘radio’).

I never really gave my attachment to this radio much thought. But, as I’ve gotten older, and possibly more emotional, my connection to it has become stronger. To the point where I wanted to see if it could be repaired. So, I tracked down Audio Technical Services, a small family company in Erdington, North Birmingham who often repair old valve and transistor radios of sentimental value. The technician explained the radio’s origins and componentry, (“It just looks like a cheap Chinese radio to me”), then offered his diagnoses. Perhaps the ferrite rod aerial had broken coils, the tuning of the trim pots might be permanently damaged, it may need a new transformer, or most likely, the problem lies with the battery terminals. As I write this, the radio is still sitting in a workshop, awaiting its resurrection. I asked for an honest appraisal if it would ever work again and although the technician was non-committal (“it’s a bit of a fiddle”), he seemed fairly optimistic. I haven’t heard back from him yet, so I still don’t know its ultimate fate. But to be honest, I’m not that fussed. Whether operational or not, it still serves its purpose as a material reminder of radio’s significance in my life.