Material Reflections is a collection of short reflective pieces exploring the complex personal relationships that people form with material things. Bringing together perspectives from a range of academics, students, and cultural practitioners, the project seeks to highlight the breadth and plurality of ways in which material things impact upon our ideas, identities, research, and practice. This Material Reflection comes from Matt Grimes, who is a Senior Lecturer in Music Industries and Radio at the Birmingham School of Media. Matt’s research interests include anarcho-punk and DiY punk scenes, DiY music cultures and subcultures; ageing within popular music; popular music memory and nostalgia. Matt is General Secretary of the Punk Scholars Network and a lifelong Millwall FC supporter. 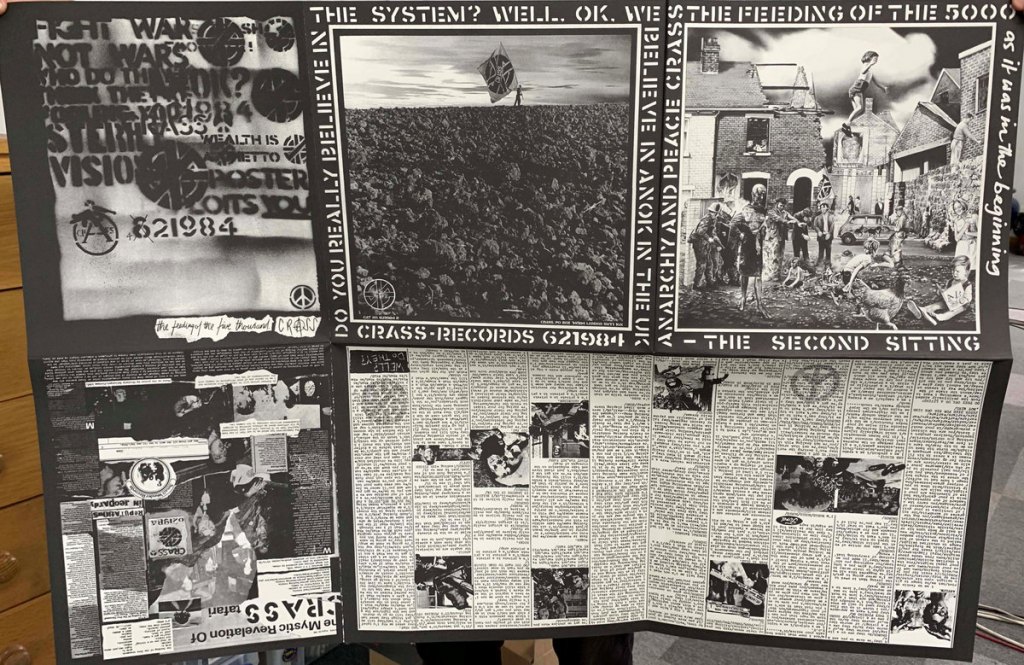 I still remember running home from town that Saturday morning, with THAT record tightly tucked under my arm as if it was only yesterday. The rush of anticipation to get back and play THAT record was almost overwhelming, so much so that I had completely forgotten the usual Saturday town centre routine of avoiding particular streets, and keeping a keen eye out for the skinheads that would revel in the oft opportunity to beat the crap out of a 14 year old punk in town on his own. So, as you can gather this was most unusual behaviour for me, but this was a most unusual record; a record of mammoth proportions that promised everything I needed at that point in my life and didn’t fail to deliver. Actually, that last bit is not quite true, but almost delivered everything and set me on a trajectory that has ingrained itself in my lifecourse.

So, I finally got home, panting, out of breath but very, very excited. I carefully slipped the vinyl out of the gatefold sleeve in anticipation, placed it on my record player dropped the needle into the lead in groove, turned it up full volume and waited. I played that record consecutively probably about 15 times, over and over that day, and to be frank I thought the music wasn’t all that great. It wasn’t the style of punk I was used to listening to but that seemed to pale into insignificance because what that record taught me was a perspective that I was never going to get taught at school.

I had become familiar with the band Crass through fanzine articles and I had heard on the grapevine and through the punk ‘zines about this record, edgy, dangerous, controversial, blasphemous, lots of swearing; everything a good punk record should contain. One of the many great things about Crass and their records was the importance and aesthetic of the record sleeve as a carrier of meaning. The unfolding multi-layered record sleeve was illustrated, collage style, with shocking images of war, animal experimentation, and state violence juxtaposed with treatises and statements, questioning power, authority and encouraging self-autonomy and dissent. But most importantly though were the LYRICS. This was raw truth, an exposition, an explanation and I am not exaggerating when I say that record changed my life, it articulated everything I was feeling at that time as a confused and angry14 year old punk. That musical and lyrical epiphany, suddenly started to put threads of thoughts, feelings and ideas into place; into some semblance of cohesive order and importance. How school, your parents, your teachers, the police were all colluding against you to try to fuck up your life and control you to turn you into a slave to the system. The combination of stark imagery, and powerful words were like gold dust to a young boy trying to find his place in all this madness of youth.

That album was vitally important to my education, my politicization, my life. The values and beliefs I gained and developed from first hearing that record, and my subsequent engagement with anarcho-punk, have mostly remained with me through my life, though as I have got older and more measured, in a less naive and Utopian way. When I am angry and frustrated with the state machine, which is often, Crass’ The Feeding of the 5000 is still my go to cathartic record.