Material Reflections is a collection of short reflective pieces exploring the complex personal relationships that people form with material things. Bringing together perspectives from a range of academics, students, and cultural practitioners, the project seeks to highlight the breadth and plurality of ways in which material things impact upon our ideas, identities, research, and practice. This Material Reflection comes from Nicholas Gebhardt, who is a Professor of Jazz and Popular Music Studies, and the current director of the Birmingham Centre for Media and Cultural Research. In it, he reflects upon how a seemingly mundane kitchen tool becomes intimately linked with ideas of space, place, and time. 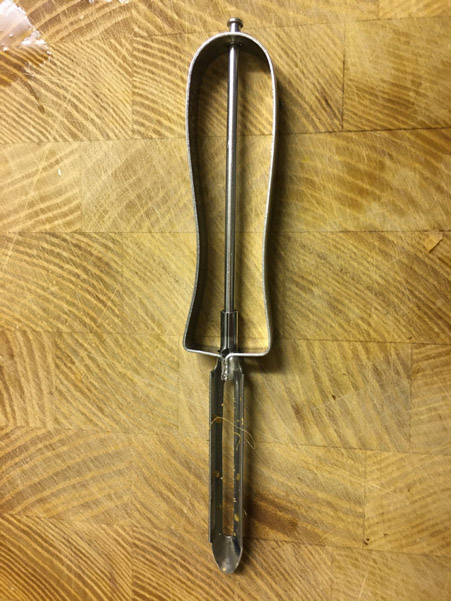 My friend and I got to the city early one morning, in July. We’d caught an overnight Greyhound bus from Gainesville in Florida, where we’d spend a few days after a long trip hitch hiking down the Atlantic Coast from Savannah, Georgia. Our bus journey had taken us along the Gulf Coast via Tallahassee, through cities such as Pensacola, Mobile and Biloxi, and then finally across the 38km Lake Pontchatrain Causeway at dawn, before we were dropped off downtown at the Union Passenger Terminal on Loyola Ave. It was hot out and it was only 6am.

Although we had talked about staying at a youth hostel a few weeks before we left Savannah, we had no real plan to speak of, just a vague idea. Someone on the bus had suggested the boarding houses along Esplanade, above Rampart. She said they were cheap, you could stay as long as you wanted, and you could cook your own food. She said the tourist office would know about the options. But as it wasn’t open yet, we got ourselves cleaned up, had some coffee and pastries, and then sat down to wait in the diner across the hall. It was getting hotter out. And it was only 7am.

Around 7:45am, a woman started organising the desk, putting pamphlets in order, checking maps, adjusting a clock, sharpening pencils. Just after eight, she switched the closed sign to open, reapplied her lipstick, straightened her glasses and looked up. “Hi there,” we said. “Good morning,” she replied. “How can I help you?” We’re looking for somewhere stay; maybe the boarding houses over on Esplanade. Heard there were a few of them, and that they might have a room for us?” Uh huh,” she said, scanning pamphlets from classier hotels and looking at us a bit more closely now. “You sure that’s what you want?” “Well, we think so.” Not sure, not even close; but still, money is tight, and we need somewhere to stay for a while, maybe a month or more. Directions, a map, recommendations of someone to speak with who could help, thanks and relief, and then out into the morning light.

This was my friend’s first time in the city, so we decided to walk through the French Quarter, get a feel for things. And it had been a while since my last visit, it was winter then, and there’s nothing quite like an edge-world as it settles into the day. Pauses to take photos out front of Preservation Hall, on the edge of the Mississippi, stopped by Jackson Square, then up Dumaine Street to Rampart Street as it runs along the bottom of Louis Armstrong Park, and then across to Esplanade. The first place on the list was the one. Small room, second floor, a fan that worked. “How ya doin?” from a friendly group on the stoop. Then a supermarket: tomatoes, pasta, olives, zucchini, capers, cereal, coffee, a vegetable peeler. We were ready for our adventure…