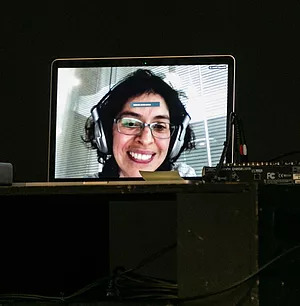 Research ‘Listening to my own migratory and nomadic voice’ by Dr. Ximena Alarcón

‘Listening to my own migratory and nomadic voice’ by Dr. Ximena Alarcón

“I have been for many years listening to my voice within my bilingual migration and sometimes with the snippets of languages that I have learnt and half-learnt during my life. More than multilingual I would like to be “multivocal” (Choi, 2017).

Voice has been a question for me, and it goes beyond metaphor. It goes to my actual voice. The inner and outer voice that I hear in English and in Spanish, the voices that I remember, and reflect on, and the ways in which I distinguish these from my own voice; the hesitant voice which doesn’t remember or doesn’t know the next word, not only because of the lack of a native vocabulary, but also because of not having a developed native sensitivity for sensing the semantic and prosodic details that convey a full expression with spoken voice. I am aware of my voice that speaks so fast without air stepping on words that mix languages, while my listeners wait. I am aware of my voice that speaks so slow for understanding, and of my voice that unconsciously imitates and appropriates known and unknown mannerisms that will create a “someone else” or a combination of voices who perform as it is needed to communicate in this host-land.

I am listening in relation to others, and that other could be myself too. For instance, when recording using binaural microphones, when I speak, my voice is in the closest position for the listener within the sound field. I am the main character of the sound events that are happening, as well as in relation to other voices, even the tiny sighs will be present on these recordings. Even the most simple microphone reveals my position within any environment. In my recording voice, I discover pauses, inflexions, and traces of emotions, as well as traces of my native region and the foreign language that I have appropriated. When I hear my voice transmitted by a telematic conferencing platform when someone has forgotten the use of headphones, I feel that my voice travels and fills in an acoustic space across the ocean with my physical presence. In my listening, that voice returns to me with some milliseconds delay that inform my memory and present identity.

My listening perspective has an impact on my attention to other voices. I wonder if when my voice sounds too loud it is because either others are not listening to me, but also because I am not listening to them. Bidirectional relationships in our listening are understood in a practical and profound manner through the Deep Listening practice as developed by Pauline Oliveros (2005). With this practice, I train on the balance needed in my relational listening, as this makes me conscious of my position. This, becomes clear when listening to my voice speaking and travelling in-between different languages. Those transitions unveil not fixed sonic identities with traces of what Janette El Haouli calls a “nomadic voice”,  vibrating between native and second languages and a multiplicity of accents, a voice without fixed territories, “a bridge for the overcoming of pre-established values and inherited questionings.” (Alarcón, 2014).

In this nomadism being conscious of my privilege in my native country, in England I knew that I needed to actually speak more than good English; I needed to perform to be heard by the professional middle class where my artistic and intellectual interests were. In short time, I became aware of the distinctions between accents and class. Being often corrected for my speech, I have felt in my skin the tension created by the power of language as a form of control and maintenance of any social status, and the liberation that I can feel when I accept its nomadism. My question now is if bidirectionality of this listening can be strong enough to free others of their permanent desire of fixing voices as identifiable and all the social and cultural weight that these convey. I am trying now to listen behind the entanglement of words, when possible, and to listen how these sound and transform, as I also do.”

Alarcón, Ximena (2014). “Networked Migrations: Listening to and Performing the in-between space”. Liminalities: a Journal of Performance Studies, Vol. 10, No 1.

Choi, Julie (2017). Creating the Multivocal Self: Autoethnography as a Method. Routledge: New York and London