Research “Jazz, Revue and a Thriller” The Response of the Birmingham Press to Duke Ellington’s 1933 Tour

“Jazz, Revue and a Thriller” The Response of the Birmingham Press to Duke Ellington’s 1933 Tour

My first contribution as an author to Blue Light (DESUK), was published under the title ‘“Jazz, Revue and a Thriller” The Response of the Birmingham Press to Duke Ellington’s 1933 Tour’.

It follows up a paper delivered on this topic at the 25th International Duke Ellington Study Group Conference, hosted by the Royal Birmingham Conservatoire between 25 and 27 May 2018. Also, given my passion about Ellington’s music, it was my privilege to become a new Board member of DESUK, joining a vibrant and passionate group of Ellington enthusiasts, as Frank Griffith kindly announced in Blue Light (Autumn 2018). 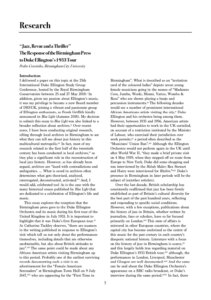 My decision to submit this essay to Blue Light is also linked to a broader reflection about archives. Over recent years, I have been conducting original research, sifting through local archives in Birmingham to see what they can tell me about jazz history in this multicultural metropolis. In fact, most of my research related to the first half of the twentieth century has been conducted in local archives, as they play a significant role in the reconstruction of local jazz history. However, as has already been argued, archives are “laced with contradictions and ambiguities. … What is saved in archives often determines what gets theorized, analyzed, interrogated, deconstructed, activated.” And, I would add, celebrated too! 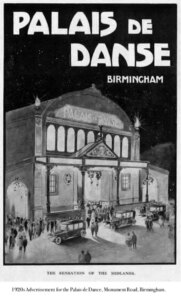 As is the case with the many historical essays published by Blue Light that are dedicated to a celebration of Ellington’s life and music.

As the title suggests, this essay explores the reception that the Birmingham press gave to the Duke Ellington Orchestra and its music during his first tour of the United Kingdom in July 1933. Over the last decade, British scholarship has consistently reaffirmed that jazz has been firmly established as part of Britain’s cultural diversity for the best part of the past hundred years, reflecting and responding to specific social conditions. However, with a few exceptions, publications about the history of jazz in Britain, whether written by journalists, fans or scholars, have so far focused primarily on London. This state of affairs is mirrored in other European countries, where the capital city has become enshrined as the centre of this music for the past century in each country’s diasporic national history. Literature with a focus on the history of jazz in Birmingham is scarce, and this largely holds true regarding material on Duke Ellington’s 1933 British tour.

With this exploration of the Birmingham press’s reception of Duke Ellington’s music in July 1933, it is my aim to contribute to an understanding of the British response to jazz outside its capital city.