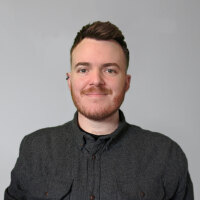 In this Game Cultures session, our final in the current run for the BCMCR, staff and current students alike came together to share their works in progress.  The session was chaired by Charlotte Stevens.

Nick Webber is Director of BCMCR and co-lead of the Game Cultures and History, Heritage and Archives research clusters.

Some of the play studies field attempts to firmly define the concept of play and the play experience – Harri argues that play is something ambiguous as our interactions to play is what makes it emergent. This led to thinking about the various sexual content emergence of pornographic video games and how it is somewhat disruptive, with some areas of emergence bringing forth sexual spaces for identity, others becoming harmful to players through their practice.

Harri is a 2nd Year PhD student and queer gamer, and as interested in researching explicit constructions of sex and sexual subcultures within video games. His research focuses on sexual play, agency, and queer player perspectives

“I’m afraid you’ve been misled.  I only play for sport.” Tomb Raider at 25: Fan-tagonism, Communal Schism and the Commodification of Canon – Nathan Glasgow

In this paper Nathan discusses the announcement at the start of the Tomb Raider 25th Anniversary celebrations in January 2021 that the next title in the series will attempt to unite three continuities of Tomb Raider games and versions of the character of Lara Croft into one united, ongoing canon beginning with the next, yet untitled game in the series.  Nathan argues that this is an attempt by the producers (as per Johnson 2017) to respond to and incorporate struggles between factions in fandom into one harmonious bloc – surely an impossible feat?

Nathan Glasgow is an MA Media and Cultural Studies student considering a PhD and his research is focused on representation in horror film and tv, and areas of videogame studies such as piracy and archiving practices, representations of women and LGBTQ+ people in gaming, and fandom studies.

“What was or wasn’t in my pants”: Problematising corpus approaches to trans representation – Frazer Heritage

This paper explores the language transgender characters use to signify their trans identity. While Frazer has previously argued for the use of corpus methods (Heritage, 2021), these often do not reveal which characters are transgender, and terms denoting transgender people have not occurred within previous videogame corpora. He explores all the transgender characters on the LGBTQ+ gaming archive (Shaw, Online) and the language used to signify trans identity, noting that it is typically highlighted through implicit means or prescribed to characters, rather than through characters explicitly labelling themselves. This has implications for writing LGBTQ+ characters and research into both translinguistics and ludolinguistics.

Frazer Heritage is a Research Fellow in the Department of Criminology and Sociology, and is interested in the intersection between language and identity, particularly through the use of corpus methods. He is the author of the 2021 monograph “Language, Gender, and Videogames: Using Corpora to Analyse the Representation of Gender in Fantasy Videogames”

Kieron is a part time PhD student at BCU, a full time psychology lecturer at Arden University and is interested in toxic behaviour in competitive video games.  In this paper he looks at people who play with friends vs those who play games with strangers online and the media effects of gaming, specifically the processes behind that which lead to toxic behaviours in gaming.

In Control (Remedy Entertainment, 2019), the player-protagonist Jesse Faden starts a journey looking for her missing brother and ends up as Director of a secret agency – the Federal Bureau of Control. Battling a supernatural threat of corruption by the “HISS”, Jesse discovers a workplace full of otherworldly dimensions. From Objects of Power which she derives paranormal power from, to Alternate World Events that her history is bound up in, Jesse becomes the person in charge of an organisation few even know exists. Drawing on different elements of work in the game, this paper will explore the representation of Jesse. This will involve considering the neoliberal expectations placed upon her and the corporate environment she is in, and the surveillance she has been under that demonstrates the conflict evident in terms of any “power” or control that she may have. Furthermore, Poppy will consider the relationships that frame her within this new world, from her incarcerated and possessed brother, to the “office gossip” of non-player characters, and the male Janitor who has arguably more power than Jesse does. Considering some of the challenges Jesse faces, Poppy suggests that through its sci-fi themes, the game offers an astute commentary on the role of women in power in the workplace, and the impossibility of the choices they must make – as well as the choices they do not have at all. This builds on Rettberg’s (2011: 20) argument that, for example, MMORPG World of Warcraft explicitly ‘serves as a form of corporate training’ in terms of both ideologies and skills amassed, to explore Control also as a training ground for the challenges of women in work.

Poppy also has a forthcoming monograph, titled Posthuman Gaming: Avatars, Gamers, and Entangled Subjectivities, with Routledge, and the book that the Control chapter will be in, Working Women on Screen: representations of women and paid labour under 4th wave feminisms(title subject to change) Co-edited by Dr Ellie Tomsett, Dr Nathalie Weidhase, and Dr Poppy Wilde Under contract with Palgrave Macmillan in their (Re)presenting Gender Series.

Keep an eye on the BCMCR website for further updates surrounding these projects.