Research Decolonising the Internet – My Experience at the AoIR 2022 Conference 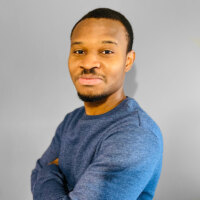 Decolonising the Internet – My Experience at the AoIR 2022 Conference

When I submitted my paper for the Association of Internet Researchers (AoIR) 2022 Conference, I half-thought it would be rejected. A friend had just sent me the call for papers days before the deadline, and I literally managed to send my extended abstract. It was a paper that I titled, “Matrix of Dependence, Postcolonialism, and Social Media Regulation in an African Context,” a paper from the last of my PhD chapters. 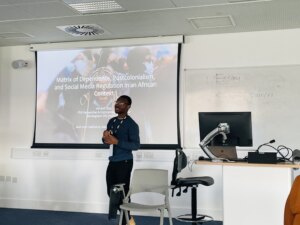 Months later, the organisers got back to me, with an odd email that began with how many papers they had to reject (approximately 45%). You know how you feel when you get an email that says something like: “Due to an unprecedented number of proposals…unfortunately we were only able to accept a relatively small percentage of submissions.” Yeah – that was exactly how I felt. But in the second paragraph, they informed me of my paper’s acceptance. After some time, the organisers came back again to say that I had been given the Best Student Paper Award. This was a pleasant surprise and I was glad to have had my work recognised in that manner.

And so the journey began. Dublin was the conference venue; it would be the first time I would be going there. On November 1, I flew to the city, which was welcoming and buzzing. My first event was a workshop on 4CAT organised by Sal Hagen and Stijn Peeters. I had specifically chosen the workshop because of its usefulness for big data research.

The high point of the conference for me, however, was the keynote speech which Nanjala Nyabola gave. Nanjala interrogated the concept of decolonisation, traced it to historical times, and highlighted its connection to modern techno-social practices. She was speaking to an audience of technology experts and researchers, so there was nothing she said that we didn’t already know. But she delivered her talk in such a vivid way that the topic felt new. A native Swahili speaker, Nanjala drew upon the fact that she had to reclaim her language to demonstrate the ways by which colonialism still affects people whose languages have been relegated because they are not English or French or Spanish. 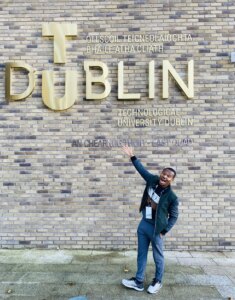 As she spoke, I was reminded of my history. I am Idoma and my people are natives of Benue State in Nigeria’s middle belt. In former times, most people were born and lived all their lives in their states of origin. But then there came what I would call the first big wave of economic migration after the civil war ended in 1970. Many in my father’s generation moved to big cities like Lagos, seeking better opportunities as a new era began in Nigeria – the years of the oil windfall. My parents joined the train and that meant that I was born and brought up in Lagos on the south-western coast of Nigeria. Lagos is all I know and I have only visited Benue a few times. Lagos is cosmopolitan and bustling; you need an edge to stand out. And I suspect that my dad felt that English would give me and my siblings that edge. So there was a policy for my siblings and I at home – speak only English, not the local pidgin type, only Queen’s English.

From that point on, English, which was what I spoke the most, became even more entrenched as my de-facto first language. In recent years, I have begun the process, like Nanjala, of reclaiming Idoma, but I have not been so successful, at least not as much as she has been able to reclaim Swahili. One reason is that I find that there is virtually on one for me to speak it to, thanks to being in the UK. But all is not lost – I understand Idoma very well and I can speak it in an amateurish way, but only if I think first in English.

English then represents a kind of postcolonial extension, and we were constantly reminded of this in Dublin, where the Irish language, subsumed by English influence, has been subjected to its own form of passive death. We see something similar happening on the internet, where English has become the language of technology. While this has its practical usefulness, it also means that the work of decolonising the internet has only intensified. Nanjala captured this brilliantly when she said that decolonisation is work, hard work. And although I have a chronic pessimism on the prospects of achieving success, I recognise that we simply cannot give up. 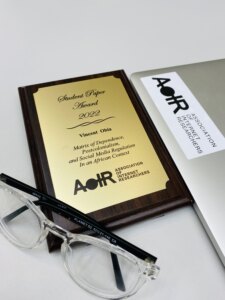 Everything else in the conference was shaped by that keynote speech. I gave my talk during the first session on the following day to a half-full room, but it was great. We had enough people to engage with the presentations, asking and answering questions. My presentation considered the regulatory options available to countries like Nigeria as far as social media regulation is concerned. I argued that no matter what regulatory option Nigeria opts for – platform self-regulation, government intervention, systemic regulation, multistakeholder regulation, even media literacy – the country is faced with the matrix of dependence on Western governments and platforms.

After my presentation, I took out time to attend other panels. And I made friends. Another event that I found interesting was a tour of Dublin’s internet infrastructure. Most Western digital platforms have their international headquarters in Dublin, and we went on a trek to almost all of them. One thing stood out to me – the fact that Dublin is both a beneficiary and a victim of techno-colonial expansion. The city (and country) benefits economically from the investments that low corporate taxes stimulate, but it suffers from the ‘colonial’ subjugation that platforms perpetrate, where Dublin locals have in some cases been ejected from choice property because of the system that corporate giants engender.

The term techno-colonialism or data colonialism itself was a point of debate during the conference. There were some who felt that the colonial violence perpetrated by European imperialists in Africa, Asia, and the Caribbeans cannot and should not be equated with platform capitalist expropriation, as Nick Couldry and Ulises Mejias argue in their book, The Costs of Connection. The jury is still out on that one. But I believe that platform capitalism has some parallels with colonialism, even if we use the term only in a metaphoric way. Perhaps there is a need to develop a new concept that adequately captures the ‘colonial’ activities of platforms. This is one of the first tasks we must undertake if we are to decolonise the internet.