Academic Archers was certainly a different kind of conference. You can find more details here but it essentially gathered multi-disciplinary papers looking at or using BBC Radio 4’s The Archers soap opera as it’s starting point.

I could write up the entire thing, but I won’t – many people will be sick of my Archers tweeting filling their timelines over the last 2 days so it’s unnecessary. But from a researcher’s perspective, it’s worth pointing out what made it quite a unique experience. 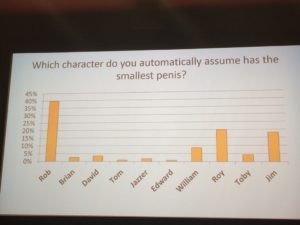 Members of the public attended. Or more specifically, fans of the show. They had actually been involved prior to this, where the papers were peer reviewed by a panel of 15 listeners and 5 academics I think. There were around 30 academics speaking, and 150 delegates, so many of those would have been listeners. I chatted with some of them on the train up, over the wonderful evening trip to the fictional Ambridge ‘The Bull’ pub in real Rippingale. They’d come to the Lincoln conference from as far as Newcastle, London, Portsmouth, long time listeners and younger ones with less experience of the storylines, but all passionate about the show. This mixture meant the conference acted as a halfway house between fan convention (no one was in cosplay) and academic conference – but the benefit in terms of research impact is clear, to expose the world of academia to publics, in a platform of sharing and conversation, that is grounded in rigorous and relevant study without always taking itself too seriously.

Sometimes research is allowed to be entertaining. And I think it had to be in the context of this conference, where day 2 started at 9 and ended at 5pm – I was on at 4.40pm and glad to raise laughs in all the right places. There were papers on perceptions of penis size, the disparity between cake consumption and diabetes, and music as used by Rob in coercive control. The papers did not always squarely address the drama and storylines of the show, but used it as a lens to explore aspects of rural or everyday life – Nicola Headlam was able to use the case study of Ambridge in exploring rural village power dynamics because she didn’t need consent from all those participants. Not all papers addressed lighthearted issues though, with seven papers devoted to the Helen and Rob coercive coercion (and then some) storyline, drawing new light on issues that went well beyond the drama we hear on the radio. 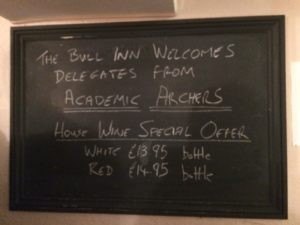 I’ve never been to a conference that trended on Twitter. Here. The press and media coverage was also very impressive. This was partly as a result of the quirky nature of the conference, and the fact that the Radio 4 Today programme could interview the organisers knowing it appealed to the overlapping Archers listener base. But I also recognise the efforts of the team to make that coverage happen. That open-ness, first in involving the public in the conference, and then in wanting to talk about it (this was their second year, so there might have been some legacy interest), was clearly instrumental here. I’m going to drop that word again – ‘impact’ – because this was a conference that felt like it really broke out of the idea of the self perpetuating academic bubble.

The whole experience. Yes, the freebies were good, including badges, tote bags and mugs as expected. But the evening meal held at the Bull was also enjoyable, preceded by a speaker at Rippingale from the village, explaining how the programme was partly drawn out of conversations with a farmer in the village. It’s also rare for a presenter to ask the entire audience to singalong to introduce the paper, but we did, to the Archers theme tune, so that it could be used in an unofficial Archers podcast.

A sense of the surreal. People usually listen to the Archers alone in their kitchen, or in the car. Not, at a conference, with 150 delegates sat in silence in a vast lecture theatre. Then later, discovering that one of the other fan fiction accounts you rub shoulders with online is here doing her own paper, and halfway through she presents you with a box of doughnuts that creates wonderful conversations in the tea break, essentially trailing my paper at the end of the day. Maybe this is more the norm for conferences relating to specific media with fan/academic (fancademic?) bases… 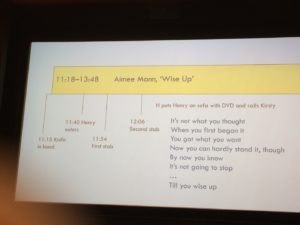 People stayed the full two days. I was concerned, being the last paper at the end of a long two days, that some people would have left for early trains by 4.40pm but as far as I could tell there were the same number of people consistently throughout the two days. Speakers presented and then stayed on til the end, as did the audience. This of course should be the norm, but conferences can sometimes be tiring – papers straight through from 9am to 5pm sounds exhausting. It might be testament to what was being presented, or how, or the general ambience but I found all the papers enjoyable, with at least two unexpectedly making me think of my PhD – relating to network theory, third place in communities, etc.

All in all, a great conference, and something I look forward to being a part of in the future.