Material Reflections is a collection of short reflective pieces exploring the complex personal relationships that people form with material things. Bringing together perspectives from a range of academics, students, and cultural practitioners, the project seeks to highlight the breadth and plurality of ways in which material things impact upon our ideas, identities, research, and practice. This Material Reflection comes from Philip Young, who reads, writes, thinks and talks, sometimes at BCU in his capacity as a Senior Lecturer in PR & Media. Now in his Golden Years, he still has spots from ripping off the stars from his face… 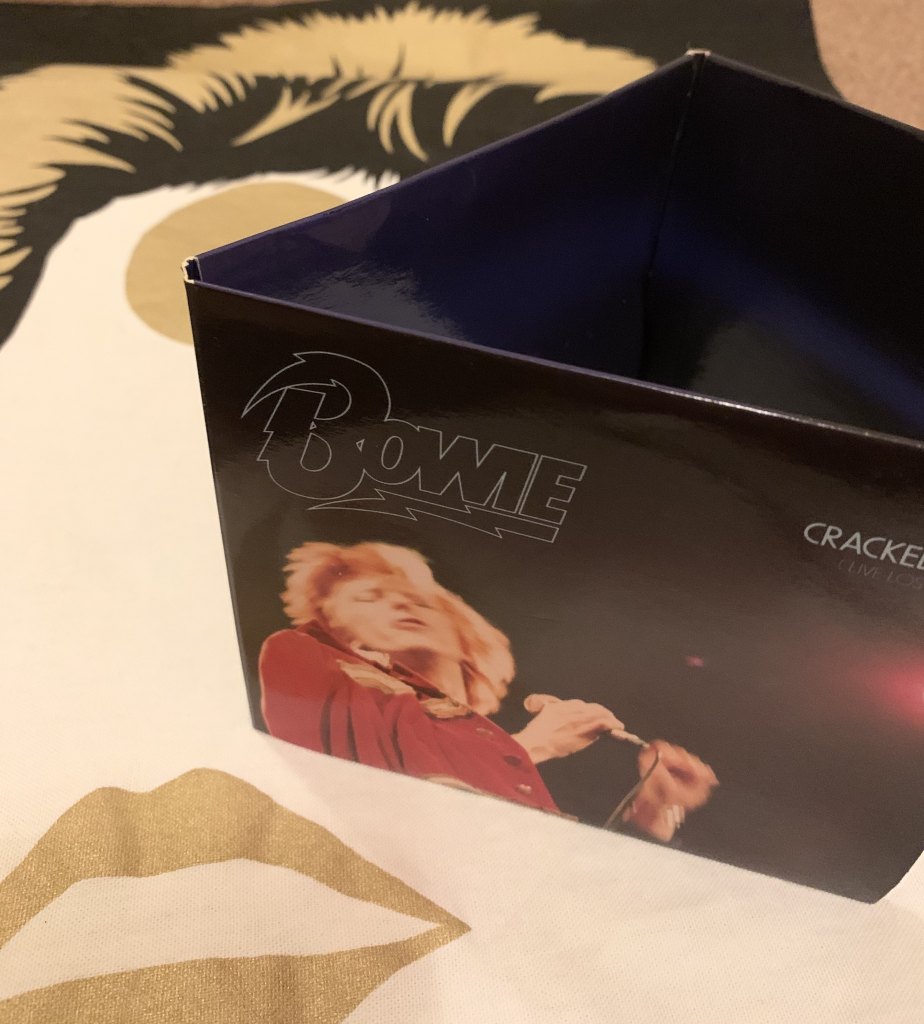 Cracked Actor (Live Los Angeles 74) is a favourite among the 70? 80? 90? David Bowie CDs I ‘own’. Favourite in a way, but by no means the most played. It doesn’t include many of my favourite songs. In truth, I have very seldom played the actual CD.

You see, I am not a naturally tidy person. But I do take great care of books – you cannot tell which I have a read and which I have not. (Unless I have split wine on them. Then you can). My CDs, likewise, are pristine, especially the deluxe, bonus track, special limited edition packaging ones which I am so easily lured into buying. (Yes, it is 2020 and I buy CDs). But this Cracked Actor is not in pristine condition. You don’t have to look carefully to see that the sleeve is warped, twisted, chipped, stripped, sticky, deformed.

Collateral dampness. One night a canal paid a visit to my ground floor flat. I lost hundreds of CDs. But the music is still there. They are playable. And I have most the tracks saved digitally.

But I lost them.

So why Cracked Actor? It is a recording that captures a moment of transition, halfway through the gruelling American tour during which Bowie mutated from Diamond Dog to (plastic) soul singer. The metamorphosis, the changing of costume, of persona, the shedding of roles, was documented by Alan Yentob for a 1975 BBC documentary which I taped, microphone in front of the TV, watched by my horrified father. (If he had seen my make up experiments…) Bowie in the back of a limousine (20 feet long?), a near corpse sustained by milk and cocaine. I was captivated … but shocked to learn Ziggy was now a soul singer. Teenage rebel me didn’t do soul. It took me a couple years to remember President Nixon and become a Young American.

There was an official release, the David Live double album. It is not great. But in 2005, with dial up modem and great patience I downloaded Portrait In Flesh, a bootleg of the Philly Dogs show that is (or isn’t) drawn from an illicit recording pirated as Strange Fascination. I burnt the mp3s on to a CD, made a cover and this I played a lot.  It turned me on.

In 2018, Parlophone released a Tony Visconti remix of the Fascinationtapes as Cracked Actor. The sound is considerably better, but David’s bizarre, regrettable (?) intros as a Puerto Rican street hustler are gone: “Is-a goin’ alright? Is a wantee rocknrollee now?” “Everyone walk around. No fall down.” It features John, I’m Only Dancing (Again) and that tender song about terrible behaviour, It’s Gonna Be Me: If you don’t know these tracks, and can’t debate Leon, don’t talk Bowie with me.

So my artefact is a flood-damaged version of a cleaned up version of a less than authentic album that most people have never heard of, one that I will not use insurance money to replace. Crack baby crack. Show me you’re real.