Material Reflections is a collection of short reflective pieces exploring the complex personal relationships that people form with material things. Bringing together perspectives from a range of academics, students, and cultural practitioners, the project seeks to highlight the breadth and plurality of ways in which material things impact upon our ideas, identities, research, and practice. This Material Reflection comes from Brian Homer, a photographer, designer and writer whose work documents the jazz scene. His photographs and reviews have appeared in a range of publications including Jazzwise Magazine, London Jazz News and UK Vibe. In this short piece, he reflects upon the power of oral histories, and how his chosen artefact comes charged with the politics and power struggles of race and racism in the United States and beyond. 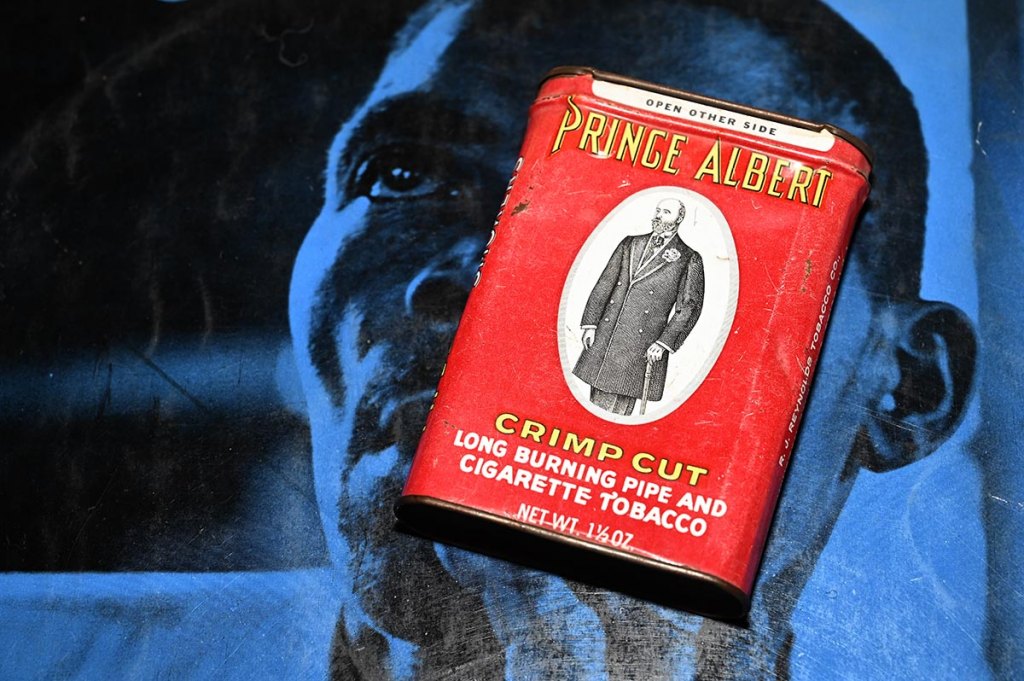 I bought this in 1975 on my first visit to the USA. Why this tin and why have I kept it when I don’t smoke and I don’t generally collect nick-nacks? It’s significance comes from Alan Lomax’s field recordings from the 1940s and first published as an LP in 1957 – Blues in the Mississipi Night.

I got to know the folk scene in Birmingham in the 1960s and at the Grey Cock Folk Club one of the regulars was Charles Parker who had produced the Radio Ballads with Ewan MacColl and Peggy Seeger. The central technique of the Ballads was the use of “actuality” – recordings made of the subjects of the programmes: railwaymen, miners, fishermen and travellers.

The final productions dispensed with the usual radio narrator and relied for their effect on the actuality edited and counter-posed with specially written and performed music. At their best the results were spectacular and the sound of ordinary people’s voices was revelatory.

I took Charles Parker’s WEA class on actuality and helped organise the Parkhouse Convention in Birmingham in 1974 at which Banner Theatre was formed. I then visited the Yorkshire coalfields with Don Perrygrove and recorded both miners and Arthur Scargill for Banner’s first production A Collier Laddie. I also met Raphael Samuel the then Ruskin College historian noted for his development of “histories from below.”

Around that time I heard about Blues in the Mississipi Night which was then out of print and was able to get a second hand vinyl copy from The Diskery. Rather like the Radio Ballads, but in a different way, the field recoding are interspersed with songs and hollers from the three blues musicians being interviewed. It’s a particularly powerful demonstration of the power of oral history and contains this passage towards the end:

Leroy: Well, what about that uh, Prince Albert Tobaccah you know?

Natchez: Well I do, I’ve heard of that in Louisiana.

Leroy: You couldn’t, you know, if you go in a store, you didn’t say, “Gimme a can of Prince Albert.” Not with that white man on the tin.

Natchez: Well what would you say then?

Leroy: Gimme a can of Mister Prince Albert.

Sib: Where was that at?

Leroy: That was all down through Arkansas, down… Gould, Dumas, Yonquipin…

So that’s why I got the tin in 1975 as a symbol of racism and the power of oral testimony. I also got a copy of Working by Studs Terkel a book that was at that time unavailable in the UK. Terkel was a brilliant non-academic oral historian out of Chicago who as well as interviewing ordinary people about their lives also interviewed, for his radio programmes and books, jazz musicians.

I edited oral recordings for the 1979 publication Talkin’ Blues (Affor Birmingham) which was nominated for the Martin Luther King Prize and the techniques have informed my creative practice ever since whether in projects, writing and editing or in photography.