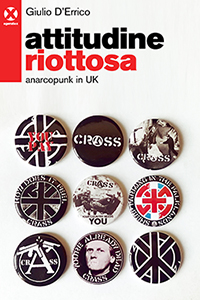 For those among you who are fluent Italian speakers, readers and writers, you might be interested in this recent Italian publication on British anarcho-punk by Giulio D’Enrico. Giulio has spent over a year collating some of the best published academic writing on British anarcho-punk and painstakingly translated it all into Italian, and then published it through Agenzia, who publish  oral stories, memoirs, autobiographies and testimonies that  intersect with historical reflections, analysis and insights. I have a chapter in this book called “From Protest To Resistance”: British Anarcho-Punk ‘Zines (1980-1984) As Sites of Resistance and Symbols of Defiance originally published in The Aesthetic of Our Anger: Anarcho-Punk, Politics and Music (2016. Autonomedia/Minor Compositions). My chapter explores the way in which anarcho-punk ‘zines disseminated the central ideas of anarcho-punk and the way that the editors mediated a shifting notion of anarcho-punk. In doing so I seek to move beyond the simpler notion that ‘zines acted as simple channels of communication, but to the idea that discourses of resistance and  defiance are constructed and reinforced through the embodiment and undertaking ideological work of ‘zine editors as ‘organic intellectuals’ and thus represent cultural work.

All News
More from Matt Grimes